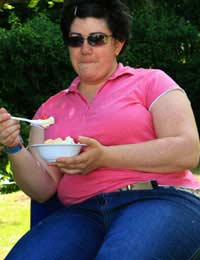 What are the Signs/Symptoms of Binge Eating Disorder?

Binge eating disorder is most often recognised by an individual’s eating habits and weight. Often binge eaters will hide the food on which they binge and lie about what they have eaten, but some binge eaters are highly visible in their daily “grazing” and will continue to publicly eat for as long as there is food offered, even when they are no longer hungry or are actually so full that they are in pain. Many binge eaters also voice negative opinions about their appearance, express a desire to lose weight or diet, and avoid exercising in public.

Who Is Affected By Binge Eating Disorder?

What Are the Health Effects of Binge Eating Disorder?

Binge eaters put themselves at risk for a wide variety of health conditions and diseases. Due to their excessive eating, binge eaters are typically overweight or clinically obese and therefore at risk for high blood pressure, high cholesterol, type 2 diabetes, heart disease, stroke, joint and muscle pain and sleep apnea. The large amounts of food consumed may also lead to stomach and gastrointestinal pain, gum infections and cavities due to large amounts of sugar and acid consumed, and constipation or diarrhoea.

Is there a Cure for Binge Eating Disorder?

Where Can I Find Further Information About Binge Eating Disorder?

Pica Disorder
Share Your Story, Join the Discussion or Seek Advice..
Hi, I want to heal from my binge eating disorder as it has claimed so much of my life. I can only do online due to me living very remote. Please help.
Tapping - 1-Dec-18 @ 5:39 AM
Hi,I wrote earlier,Along with my severe laxative abuse,I want to know if my vomiting that I have ben doing over the last,Thirtyfive year's could have tore up my throat so bad,That now I can Now I can not hardly talk-And all of the bleeding and scar tissue in the rectal area,Could severe milk of mag abuse cause the scar and severe pain?
Joker - 20-May-18 @ 10:09 AM
Title:
(never shown)
Firstname:
(never shown)
Surname:
(never shown)
Email:
(never shown)
Nickname:
(shown)
Comment:
Validate: