What is an Eating Disorder? 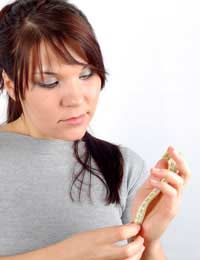 The three most common eating disorders are anorexia nervosa (anorexia), bulimia nervosa (bulimia), and binge eating disorder. Though each of these disorders result in different eating behaviours, each occurs when sufferers can not separate their emotions from their eating habits and this skews the way, and the amount, that they eat. Eating disorders can strike young or old, male or female, any race and any income level. However, eating disorders are, by some estimates, eight times more likely to affect women than men and are also more frequently found among younger women.

Anorexia is an eating disorder in which the sufferer is terrified of gaining weight and decreases the amount of food that (s)he will eat in an attempt to limit weight and body fat. If left unchecked, some anorexics decrease their daily food intake to the point that they literally starve themselves. Even when they are physically wasting away, anorexics perceive themselves as heavy and continue eating as little as possible. Without proper nutrition an anorexic’s internal organs can become damaged and in extreme cases death can result.

Bulimia is an eating disorder marked by consuming a great amount of food in one sitting and then purging this food by inducing vomiting or taking laxatives and/or diuretics. Often this binging and purging is conducted in secret and the food and laxatives/diuretics are kept hidden. This binging and purging becomes a cycle, but bulimics may never lose, or gain, enough weight to make their eating disorder obvious. Bulimia also brings a host of associated health concerns, particularly due to the constant purging that can damage the digestive tract, mouth, teeth and salivary glands. The cycle of binging and purging may also result in vitamin and mineral deficiencies that could eventually lead to heart damage and/or heart attacks. Some bulimics may not purge after a binge but instead fast or exercise excessively to burn off calories. These behaviours are also detrimental to physical health and can lead to anorexic tendencies or a “switch” in eating disorders to anorexia.

Similarly to bulimics, those suffering from binge eating disorders consume vast amounts of food at one sitting. However, unlike bulimics, they do not follow this by purging or ridding themselves of this food afterwards. Binge eaters can suffer from side effects such as obesity, diabetes, high blood pressure, high cholesterol and heart disease and are also at risk of developing bulimic tendencies to investigate methods of purging and anorexic behaviours such as avoiding food and severely limiting calories. Unfortunately, because many binge eaters are severely overweight, these behaviours are not often discovered until a significant amount of weight has been lost through unhealthy means.

Eating disorders are both physically and mentally harmful, but it is very rare that someone suffering from an eating disorder will recognise these risks and ask for help on their own. Instead, it is often family and friends who will need to intervene and find help for anorexics, bulimics and binge eaters. For further information on eating disorders, visit your GP or contact the National Centre for Eating Disorders or the Eating Disorders Association.