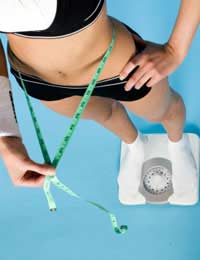 Eating Disorder Not Otherwise Specified must be diagnosed by a qualified mental health professional, though the only diagnostic guideline is that the individual’s food and eating behaviour meets only some of the diagnostic criteria of other eating disorders.

For instance, an individual who avoids eating, severely limits calories and refuses to eat certain food groups, but still has regular menstrual cycles and is not at least 15% below a healthy body weight may be diagnosed with EDNOS as (s)he can not be fully diagnosed with anorexia (due to the presence of menstrual cycles and a total weight loss that has not yet dipped below 15% of a healthy body weight).

Similarly, an individual who binges and purges every few weeks, or who purges after only small amounts of food, can not be diagnosed with bulimia (which requires binges and purges at least twice a week, and purging after a binge) and so may be diagnosed with EDNOS. Binge eating disorder may also be diagnosed as EDNOS, as may be orthorexia, a disorder in which an individual eats a relatively healthy and appropriate diet but is scared of some food types and refuses to eat them.

Once an Eating Disorder Not Otherwise Specified is diagnosed, a treatment plan will be drawn up in order to address all of the behavioural signs and symptoms as well as the underlying mental and emotional issues that have contributed to these behaviours. Very often treatment for EDNOS includes individual counselling or talk therapy, family counselling, cognitive behaviour therapy (to change food and eating behaviours), attendance at support groups or group therapy, and nutritional counselling and planning. ENDOS is very rarely treated with medication unless it is prescribed to treat associated conditions such as depression.

Further information on the diagnosis and treatment of EDNOS should be obtained from a GP, private mental health professional or from the Eating Disorders Association and/or National Centre for Eating Disorders.