Home > Coping > How to Avoid or Prevent an Eating Disorder

How to Avoid or Prevent an Eating Disorder 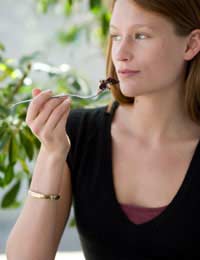 Eating disorders such as anorexia bulimia and binge eating disorder are most prevalent in countries and cultures which place a high degree of importance upon being thin and presenting an appealing image. Most people with an eating disorder feel that they are not as thin, and therefore as successful, as they would like to be and use their eating behaviours to either attempt to rectify this (by restricting calories and losing further weight), or find relief from this (such as by binging and/or purging). Unfortunately there are no cures for eating disorders, but there is much that can be done to prevent an eating disorder from developing.

The three most common eating disorders are anorexia nervosa (anorexia) bulimia nervosa (bulimia) and binge eating disorder. Anorexia is an eating disorder in which an individual is terrified of gaining weight and so decreases the amount of food that (s)he will eat until (s)he literally begins to starve. Bulimics, in contrast, consume an excessive amount of food in one sitting and then purge by making themselves sick or taking laxatives/diuretics. Binge eaters eat excessively in one sitting, or eat constantly and excessively such as by “grazing” all day, but do not engage in any purging behaviours afterwards.

Maintaining a healthy balance and healthy outlook on life are the two key means of preventing an eating disorder. A healthy balance in life means that an individual is able to balance work/school and personal life, a healthy diet with occasional treats, and exercising for fun with an appropriate amount of rest and relaxation. A healthy outlook is such that an individual can recognise the “big picture”, that weight and appearance are just one facet of a person. What is more, maintaining a healthy outlook allows an individual to remember that (s)he has both strengths and weaknesses, but does not allow him/her to get caught up in flaws.

To this end, individuals who routinely express dissatisfaction with their work, their personality or their appearance should consider getting expert advice before these thoughts take root. Family and friends can help individuals stay strong and prevent an eating disorder by:

Eating disorders such as anorexia, bulimia and binge eating disorder often affect individuals with low self esteem and low self confidence, and who feel overwhelmed by life. These individuals often equate thinness and a pleasing physical appearance with success, so constant reminders that this is not the case go a long way towards preventing an eating disorder. Those who feel that they, or someone they know, could be susceptible to an eating disorder should contact their GP or a qualified mental health professional for further information and advice.

Confronting a Suspected Eating Disorder
Share Your Story, Join the Discussion or Seek Advice..
The trim down club is website about how to eat foods in order to lose weight - whilst the information is very good and informative, i'm not sure it's helpful to have this advert on a page that is trying to help people with anorexia?
annac - 3-Feb-13 @ 6:19 PM
Title:
(never shown)
Firstname:
(never shown)
Surname:
(never shown)
Email:
(never shown)
Nickname:
(shown)
Comment:
Validate: