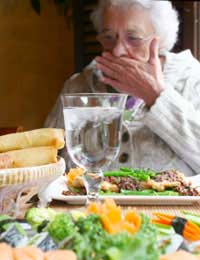 The general public are becoming increasingly aware that the older generations often suffer from eating disorders, namely anorexia. This anorexia differs from anorexia nervosa as the person doesn’t decrease their food intake to lose weight or because of a distortion of body image.

There are several reasons why an older person may not be eating sufficiently and these can include a lack of money to buy food, being physically unable to go out and buy food or carry it home, be unable to prepare a meal so therefore do not eat proper nutritious meals, or because they lack the motivation because of a fragile emotional state.

Whatever the reasons, it is vital that attention and awareness is further heightened so that we can make sure we notice the signs of an older person who is not eating properly and find ways around the issue that is causing the problem and look after the older generations.

Some people do not deal with growing older very well and this may be affected further if physical health is deteriorating. There is a chance that depression can develop causing a person to not feel the need or motivation to eat at all.

It is no secret that those living purely on a state pension find themselves on hard times every now and then, especially during the winter months when it is harder to stay warm, particularly when fuel costs are so high. Due to this many people find themselves having to make the decision of whether to spend their money on heating their home and being warm or eating healthy and nutritious meals. Often the decision is to warm their home a little and eat less; this can easily lead to a state of anorexia as they are not eating enough to sustain their body.

As we get older our body slows down and we lose muscle mass and bone density; this makes physical activity increasingly difficult to sustain to the same level.

This is a very good example of how easy it may be for an older person to continue to do the shopping. Not only may it be very hard to go to the shops, but they are then faced with carrying a heavy basket or pushing a trolley around the shop, standing in a queue for a long time and then having to pack the bags and carry the shopping home. This can be almost impossible for those who have already got limited physical capability and can force then to only do a minimal shop every time they venture to the nearest grocer’s or supermarket.They may well want to eat well but the simple act of going shopping becomes a nightmare of a chore that may not be achievable.

It is not only doing the shopping that may be restrictive as cooking a meal might not be very achievable either. The rising costs of energy, whether it is electric or gas can mean that those with very low incomes do not have enough supply to heat their home or cook a meal.

There are many reasons why older people may find themselves with an inadvertent eating disorder, but with help and provisions, this issue may be avoidable in many circumstances.

Eating Disorders and Dementia.
Share Your Story, Join the Discussion or Seek Advice..
[Add a Comment]
I am 69, have difficulty eating for a number of reasons - dental problems, lack of motivation, difficulty shopping, arthritis making cooking arduous, being a "picky" eater. But I am told by doctors/ psychiatrists that I "do not" have an ED, because I don't restrict, purge, have body dysmorphia, and I'm not a teenage girl! Yet I have a BMI in the "danger range" on the UK NHS site! It's almost completely ignored!
SkinnyRose - 23-Jan-19 @ 1:48 AM
Hi,I am 56,Year's old. And when I was,19,Year's old,I was living in,Texas,I came out of a very dysfunctional background. And at the age of,about,19,I stood about,6,foot,three,Inches,I weighed about,250.,Lbs. And Due to my abusives background, I was so filled with emotional pain,I thought I invented something brand new,Making myself,vomit,And taking laxitives to loose weight. In the beginning,I took a couple oflaxitives a day,And then moore,and then moore,Till I was taking about,100,A day,They no longer worked. So then I started taking,Milk of mag,One bottle a day,Two bottle's a day,Some times,Three bottle's a day,To where I would go unconscience.. Three times,I died,The hospital had to put me on life support,Now my rectal area is all riped up,I choke so much I can hardly talk. I can not get no help,becouse all the Dr. ask is,WHAT KIND OF INSURANCE DO YOU HAVE !!!!,and my insurance does not pay that much,And I have,ZERO,family,Or any other support. I have a lot of blood coming out of me from the back,But due to my lack of insurance. Nobody want's to help. And by the way,I am a man,not a girl,A know,Not many men have this condition. God bless,and take care
Joker! - 20-May-18 @ 10:00 AM
@agentwoo74 - perhaps she's just ill and it has nothing to do with anorexia. People lose their appetite when they are generally unwell. It just sounds like she is not feeling great, even though the original illness has been cured. I hope she gets better soon :(
Jas - 28-Nov-17 @ 12:36 PM
my mum is 75, she has COPD and is in hospital at the moment, we think she is suffering from an eating disorder because she has recovered from the original cause of her hospital admittance ( carbon monoxide poisoning through being on her oxygen 24hrs a day) she is still in hospital because because she is refusing vitamins and food she weighs 23kilos she is 5ft 1" she said she only lost her appetite a week ago and before this she was 6.5 stone ( as if you could really lose that much weight in a week). I don't really know what Im asking I just don't know what to do or where to start to help her as I didn't even know anorexia existed in the elderly.
agentwoo74 - 27-Nov-17 @ 4:53 PM
Title:
(never shown)
Firstname:
(never shown)
Surname:
(never shown)
Email:
(never shown)
Nickname:
(shown)
Comment:
Validate: